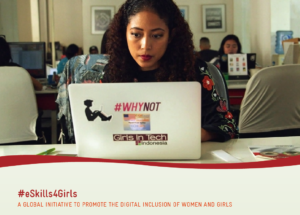 For digital technologies to unfold their positive potential on Gender Equality and Women’s Empowerment, the gender digital divide has to be overcome – this is the main message of the BMZ initiative #eSkills4Girls. Currently, women only hold 24 percent of all jobs in the ICT industry and more than 250 million fewer women than men have access to the internet. The sector project “Digital Development” supported the BMZ to establish an international dialogue on the participation of women and girls in the digital world during the German G20 presidency. As a result, the Heads of State and Government endorsed a statement on #eSkills4Girls as an annex to the G20 Hamburg Summit Declaration. The joint statement calls for closing the gender digital divide by overcoming barriers to women’s and girls’ access to, and use of digital technologies and for promoting their education, employment and entrepreneurship opportunities. 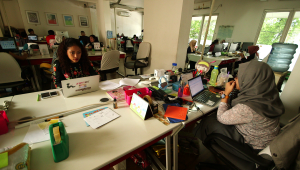 To address gender stereotyping in the tech industry, the project conducted a study on female role models and produced a video, fostered innovation by the means of a Hackathon, established an #eSkills4Girls network in African countries and initiated new country specific interventions in collaboration with other ongoing projects.  In addition, G20 member states agreed to share best practices on an online platform. The latter was developed by the sector project in a collaborative effort and with the support of a consortium of international organizations – ITU, UN Women, UNESCO and OECD. Of particular relevance for the success of the initiative was the cooperation with like-minded countries including South Korea and Canada, who have adapted their political agenda by addressing the issue. To promote innovation and sustainable change, the cooperation with the private sector was vital: Together with Google, first ideas to implement joint activities have been developed – others have already yielded first results.

Gender Impact
Within only one year, the #eSkills4Girls initiative achieved the following: Promoting role models of women and girls in tech; Setting up new networks to foster learning between grassroots initiatives; Strategic partnerships with the private sector to promote local innovations; An online platform to facilitate knowledge exchange; Implementation of new projects by G20 countries.

In 2018, three new #eSkills4Girls projects are starting in Mozambique, Cameroon and South Africa with a total volume of 8 Mio. Euro. The initiative has also been taken up by the Abidjan Action Plan decided upon by the African Union and the European Union. And the sector project Digital Development, together with BMZ and UNESCO, has assumed the leadership of the Skills Coalition of EQUALS – a multi-stakeholder partnership to achieve gender equality in the digital age.

Have a look at the pictures of the Gender Slam Team performing:

GIZ staff may have a look at the recording of the Gender Slam and the Award Ceremony.