GIZ Zambia, namely the country director Mr. Thomas Schaef and the Gender working group1 are helping to contribute towards the company wide and Africa Department gender strategies, by promoting gender at country as well as program level and making gender mainstreaming an integral part of all operations. Thus, a series of activities has been conducted during 2014& 2015 for “putting gender on the agenda” in accordance with the Zambian gender motto.

A gender officer2 was hired and a series of sensitization events for all staff groups took place in form of breakfast meetings and covered topics on: sexual harassment, gender based dis-crimination, men and gender equality, equality at the workplace and gender mainstreaming in general.

A gender audit was conducted which led to the GIZ Zambia Gender Strategy which in-cludes the gender plan of operations for 2016-2018. This document adopted the company wide strategic framework pillars to the Zambian context and set out principles, objectives and target indicators to guide the gender mainstreaming work of GIZ Zambia. The strategy3 was launched on December 5th 2015 and will be implemented through the gender structures which comprise of the gender officer, the gender focal point persons4 and the gender working group. The monitoring will be done in close collaboration with the management and through the country planning. The financing of the strategy is shared amongst all programs and the coun-try office.

A GIZ Zambia Gender leader prize was introduced to award the most gender sensitive pro-gram/ AV and to appreciate leadership support to gender work. It is an initiative that aims at appreciating our leaders who have contributed positively towards gender equality, allocated resources for gender mainstreaming work and engage in policy dialogue on gender equality with partners, beyond what is required. It is not a competition but rather recognition of leader-ship support to the work of the gender working group in promoting gender equality and gen-der mainstreaming in our programs and the company. All staff groups may vote and the prize is awarded by the gender working group on an annual basis during the general assembly.

Gender equality is an essential factor in achieving sustainable change and is therefore one of the key values on which our work is based. Gender-differentiated procedures and consistent efforts to ensure that women and men enjoy equal opportunities are among the features that define the quality of our work. We are guided by this benchmark and advise our commission-ing parties and clients on designing and implementing gender-sensitive measures. In doing so, we help to successfully position GIZ in the field of international cooperation for sustainable development and international education work.

A KAP- (Knowledge, Attitude & Practice) Survey on Gender and HIV was conducted amongst GIZ Zambia staff in September 2013. It revealed that 58.1% of the staff showed a lack of awareness about gender structures and policies. Therefore, the idea arose to make the GIZ gender strategy more accessible and popular amongst all staff groups.

Since then, a comic version of the GIZ Gender Strategy has been developed in cooperation with the local artist Kiss Brian Abraham, which incorporates the 5 strategic framework pil-lars: 1. political will and accountability, 2. Gender sensitive corporate culture, 3. Gender competence, 4. Gender equality within the company and 5. Process adjustment

The GIZ gender strategy aims at strengthening gender equality both in the services we deliver and within GIZ itself. This means we will make continued and greater use of synergies be-tween gender mainstreaming in our development measures and gender equality within GIZ. We consider the everyday application of gender equality especially as a provider of gender advisory services to our partners and commissioning parties. The strategy addresses GIZ staff members first and foremost. It is up to them to put the strategy into practice.

The comics aim at raising awareness of GIZ Zambia staff about the GIZ Gender Strate-gy objectives and gender mainstreaming approaches in the programs. Through illustra-tions it also aims at making gender work more visible and attractive.

Five programs, namely: Support to reform of the water sector (RWS), Competitive African Cotton Initiative (COMPACI), Civil Society Participation in Governance Reform Processes and poverty reduction (CSPP), Strengthening good financial governance (GFG) and Decen-tralization for development (D4D) plus the country office have been covered and chose a gender related situation from their daily work to reflect their program in the comic strip.

The GWG decided to create this gender awareness raising material in form of comics to make it more appealing and easy to under-stand for all staff members of GIZ. Further-more, addressing issues in illustrations is more fun and specific for people to relate to in their daily lives. Each comic ends with a positive outcome that is in line with the objectives of the GIZ Gender Strategy:

Political will and accountability:

Objective: Managers in the field structure use their country plans to drive forward implementa-tion of the GIZ Gender Strategy at country level.

Indicator: In one of the years between 2013 and 2016, at least 80 % of the GIZ offices incorporated a gender-related annual objec-tive and/or priority measure into their coun-try plans and has then implemented it.

Objective: The GIZ policy on preventing disrespectful behavior and harassment guides the actions of those working in the Africa Department.

Indicator: The GIZ policy on preventing dis-respectful behavior and harassment is com-municated to everyone in the Africa Depart-ment in 2014, and activities take place to make staff aware of the issues.

Objective: The gender competence of the gender focal points is strengthened in order to ensure the quality of advisory services.

These are approved by the Management Committee and are put into practice as of 2015.

By 2016, 80 % of gender focal points feel they are well-qualified to carry out their role.

Gender equality within the company:

Objective: The number of management jobs (salary band 5-7) in Germany and abroad and the percentage of national personnel posts (salary bands 5 and 6) that are filled by women either stay at the current level or, if possible, increase.

Objective: Using a results-based approach, gender is taken into account in our programs to a greater extent, and the gender objectives in our commissions are achieved.

Indicator: An annual assessment of 20 com-missions shows that gender is mainstreamed using a results-based approach in at least 80 % of them and that the objectives relating to promoting gender equality have been achieved.

Each program printed a banner and poster versions of the strategy which are now to be found in each office.

As this material was mostly created to be used for the promotion and sensitization about gender inside our company, it never the less contributes to promote GIZ’s work in the field of sustainable development in cooperation with our partners and makes us more credible. Only if we live what we preach can we serve as a role model for creating equal opportunities for man and wom-en in the workplace and can give our part-ners and clients reasons for stressing the recognition of the gender- differentiated approach. 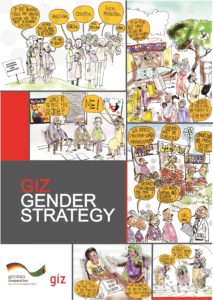 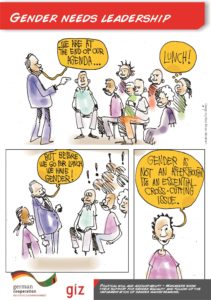 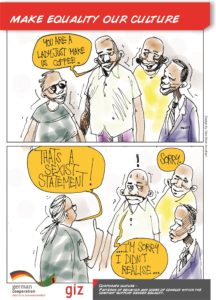 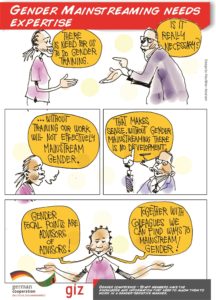 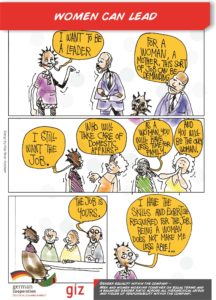 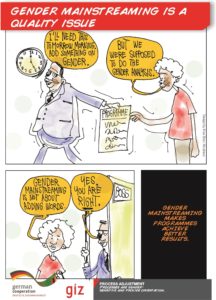