Ambassadors of Change in their Communities

Jordan is one of the poorest countries in water resources, as the per capita share is 145 m3 which is far below the international water-poverty line (1000m3/year). This crucial problem needs not only wise management of water resources by water utilities, but also the rational use of this precious resource by the user. To meet this need, and with the generous support of the European Union, GIZ has implemented the WRAP project (Improved Water Resources Security for Low Income Rural and Urban Communities).

One of the approaches of this project is to provide the water-users with the most advanced tools for water management and to bring about the involvement of the local community. This was achieved through a partnership with the Jordanian Hashemite Fund for Human Development to implement two activities; the first was introducing water saving measures in households and community and the establishment of water-wise women’s groups. 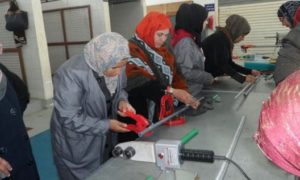 The WRAP project believes women can be Water Wise Women and knowledge, providing concrete, appropriate and workable advice on efficient water management. Three water-wise women’s groups were established in Ma’een, Mukhybeh and Rawdah. A total of 60 women were trained on the water situation in Jordan, groundwater protection, basic electricity, household hygiene and health and rainwater harvesting for garden irrigations. Finally 17 women were selected to participate in a 28-day intensive training on plumbing and received a set of plumbing tools. 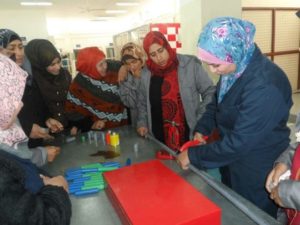 WWW members have now started forming their networks and connections within their communities and sharing the experiences and good practices gained. Moreover, they will help JOHUD to install the water saving devices in their communities. A month after the final plumbing training course was completed, we met these women again and they shared their achievements. We’re proud to share with you here the success stories of five selected women.

Hind Al Nawaji, is a member of Water Wise Women from Rawdah. Hind was smiling when she told us her story, remembering how lucky she was to participate by chance. Hind says: “I didn’t even know what Water Wise Women were until a friend of mine who is going to get married soon, asked me to participate instead of her.” She asked her husband’s permission, as according to the village culture, women should not go outside of the house without the husband’s permission. Hind faced a lot of opposition from her husband, but luckily she managed to convince him.

Hind was very happy about the information she started to learn about water conservation. Until then, she hadn’t worried about the water leakage in her house. She told us: “After the training I put a bucket under the water tap and was shocked in the morning to see how much water we were wasting without even knowing.” Consequently, she is very proud of the basic water harvesting techniques she is using now in her house.

She told us another amusing story. After she had completed the plumbing training, the kitchen tap broke and her husband did not believe in her ability to fix it, therefore he brought a male plumber to fix it and this man asked for 28 U.S Dollar, which her husband could not afford at that time. After

convincing him to allow her to try, she was able to fix it for only 2 U.S Dollar. After that, Hind said with shining eyes: “Finally my husband believes in me.”

Hind was surprised at her inner potential, as she described it. She is now a stronger and more confident woman. She believes in herself and her ability to make a difference. She even undertook the voluntary maintenance of the Development Directorate at Rawdah. 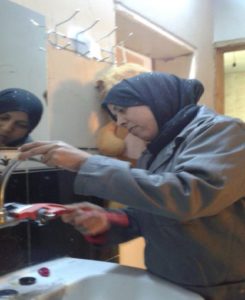 Yusra Yousef: Another member of Water Wise Women from Rawdah, she was amazed at the huge amount of information she learned, through her participation in the project, about hygiene, water harvesting, electricity and plumbing. “Now I am no longer using the chemical cleaning products and use only the natural one such as brewed tea and lemon,” Yusra says. Moreover, I learnt basic hygiene at personal and household level. She was smiling and looking at her five-year daughter when she said, “Yesterday my little daughter was telling me how to clean the toothbrush”. She was proud to confirm, “I passed all the information I learned to my children and family members. Yusra also participated in the plumbing training, and as she mentioned, her husband now calls her the house plumber. Yusra undertook the full maintenance work of her house after she had completed the training and, as a result her water consumption was reduced from 4 m3 every two weeks to 4m3 every 20 days. Moreover, she has now accepted an offer to do the plumbing work for a newly built member of Water Wise Women from box that was given to her during the training.

Muntaha Al Nabulsi: is a member of Water Wise Women from Ma’een. Muntaha was lucky to have the approval and the blessing of her husband to participate in the programme. “This is the best experience in my life”, Muntaha started her story, and “I learned a lot about water conservation, water harvesting and the current situation of water in Jordan.

Even though she had to leave her home at 6:00 a.m. to be able to join the plumbing training, she was so happy and motivated to learn all the important information. Muntaha was proud to inform us about the full water network maintenance she had done for her house, which could not have been done without the support of the EU, GIZ and JOHUD. She is planning now to open her own business in plumbing after she gets the certification. 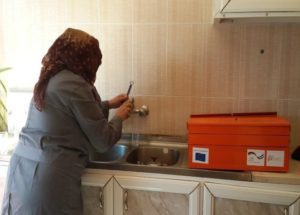 Fatima Abu-Gaith: a member of Water Wise Women from Ma’en, unfortunately, Fatima did not have the same support from her husband as her friend, Muntaha, in the beginning of the training, but she managed to convince him later. Fatima was shocked with the information she learnt about the water situation in Jordan, “I used to waste a lot of water- but not after I learnt these facts. I have to conserve the water for the coming generations,” Fatima says.

Fatima described herself as lazy woman, enjoying doing nothing, but the training motivated her to work and be a productive member of society. Attending the training was a challenge to Fatima, since she had to leave her three young children at home. After the training, Fatima fixed the water network at her parent’s house, and now they don’t waste water.

Different from Muntaha, Fatima is not dreaming of having her own business, but will do voluntary work if needed for those in her neighborhood. 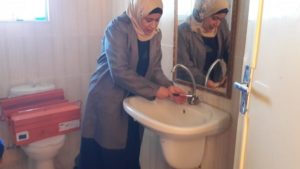 Ibtisam Falah: is a member of Water Wise Women from Ma’en. Ibtisam is a government employee and therefore, wasn’t able to attend all the sessions. But she was happy at the level of information she got which she shared in her workplace.

With her WWW group, she delivered voluntary awareness workshops in schools and governmental institutions. She even fixed a problem of water leakage at her friend’s house.