The registrations for our offered Speed Coaching – Female Finance “Language and Salary Negotiation” by the Linguistic Advisory “LUB” were so numerous that Dr. Burel* thankfully agreed to offer the coaching as announced on 27.02.19 and as well on 28.02.19. The colleagues were advised either in our office or via Skype for Business. The resonance was overwhelming throughout!

Also the Keynote meeting to the topic Womanomics – successful female positioning in the job in the context of the Gender Week was a full success. The auditorium was very well attended on Wednesday with around 200 employees* and numerous stimulating discussions on the topic followed.

An event by Equal Opportunities Commissioner Eschborn in the GIZ Gender Week 2019. 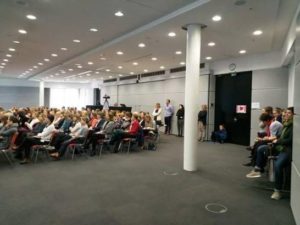 One comment on “Womanomics – successfull female positioning in the job”