1- Libyan Context and Implementation Environment:
After Gadhafi’s coming to power in 1969, the civil and Shari’a courts were merged and civil courts with
jurisdiction over family matters were created. The personal status laws which govern legal procedures
that pertain to matters such as marriage, divorce and inheritance are still derived from Islamic law. Family
law tends to discriminate against women, and there is no proper defense against domestic violence.
The Libyan revolution of 2011 did not lead by any means to development of women status in the society.
Women still strive to enjoy their basic rights and gain access to political inclusion and they remain
underrepresented in the governmental departments.
Since 2011 the security situation in Libya worsened significantly: On April 4th 2019 General Haftar and
the self-styled Libyan National Army (LNA) declared war on GNA in Tripoli. The conflict seriously affects
the infrastructure as well as the sufficient supply with fuel, which is noticeable by long lasting power-cuts
and a non-reliable water supply. Furthermore, several municipalities are overburdened by the massive
influx of IDPs. The current armed clashes between GNA and LNA led to more than 1500 killed (KIA) and
6400 wounded (WIA) are currently further escalating in the southern Tripoli axis.
The security resulting from endless cycle of armed clashes and warring in addition to the general lack of
law and order, heavily impacted the freedom of women to openly express their opinions, restricted their
movements and narrowed down their activities. Not only women themselves were concerned about their
own safety but due to the prevalent circumstances also families felt obliged to practice their power and
authority over their female members to avoid any social scandals.

2- Brief Presentation of the SML project:
On behalf of the Federal German Ministry of Economic Cooperation and Development (BMZ), the
Deutsche Gesellschaft fur Internationale Zusammenarbeit (GIZ) GmbH is implementing the Project
“Support to Municipalities Program in Libya” (SML). The Program is co-funded by the European Union
through the Trust Fund for North Africa (EUTF). It is implemented in close collaboration with the Libyan
“Ministry of Local Government” (MoLG) of the internationally recognized “Government of National
Accord” (GNA) in 17 municipalities in Libya.
The Program is designed to support decentralization and inclusive local governance through the
devolution of basic service functions, local economic and civil society development in selected
municipalities with the following intervention areas:
1. Support of municipal and local authorities in fulfilling their role and responsibilities and strengthen
horizontal and vertical cooperation and networking
2. Provision of basic services at local level with increased access to services for most vulnerable
groups, in particular woman, internal displaced, migrants and refugees
3. Develop and implement projects for local economic development, recovery and job creation
4. Strengthen civil society organizations to develop and implement projects for conflict resolution and
social inclusion of vulnerable groups, especially IDPs and migrants.

Due to the conflict and limited access of international GIZ staff to Tripoli and Libya, the Project is mainly
implemented in remote management. The international advisory team is residing in Tunis. This Team is
providing intensive advisory and consulting services to the national GIZ team, the project partners in the
Ministry and Municipalities and the established focal points in the Municipalities.

3- Context of the Women Development and Training Center Activity
The Women Development and Training Center (WDTC) approach is a result of the developed
intervention strategy for identifying and prioritizing quick impact projects and the introduction of the
participatory planning process. These processes were implemented by the national GIZ staff in 17 Libyan
partner municipalities in close cooperation with key actors of the Libyan Ministry of Local Government
(MoLG) and the municipalities within the framework of the “Support to Municipalities” Project (SML), 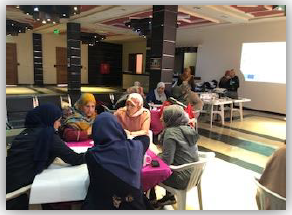 One major outcome of the SWOT analyses and participatory planning
process conducted with citizens of each partner municipality was the
demand for measures to improve the status of women since women
are confronted with increasing limitations in their participation in the
political, economic and social life in Libya after the revolution. They
are facing increasing difficulties to find jobs and are mostly affected
with the consequences of the civil war and ongoing conflicts.
Based on this demand from the woman, citizens and officials of the
municipalities in the workshops and the findings, that the once
flourishing textile production, – founded on the traditional tastes and
fashion talents of Libyans -, before the revolution was destroyed, GIZ
decided together with the MoLG, the elected mayors and municipal council members to invest and
establish Woman Development Training and Production Centers (WDTC) in those municipalities which
are able to provide the required building and support for the establishment of the WDTCs. The
Municipalities and GIZ signed MoUs for the allocation, renovation and equipment of the buildings to
become WDTCs. These WDTCs aimed to be entirely managed by the woman who use the center. It
should provide facilities for skills training and income generation and hence should mitigate the gap of
women’s inequality and contribute to strengthen and empower woman economically, socially and
politically.
The holistic WDTC approach is focusing on demand-oriented intervention areas with high economic
potential. Hence, the centers are one by one hand designed with focus on employment promotion, job
creation and development of small businesses for women, currently in the tailoring, design and textile
production sector. Options for other sectors such as catering, food processing, have been identified. In
addition, the WDTC shall be enabled to provide a range of social, cultural and recreational activities and
trainings, which will be further examined in detail. Furthermore, the networking and interlinking of the
centers will establish and improve the nexus between national and municipal level as well as between
urban and rural levels for empowering woman and enhancing production and marketing, respectively.

4- Concept of the Women Development and Training Center
In a highly centralized state with most training facilities under government ownership and control and a
marginal private sector the WDTC´s can be seen as the first service provided by the municipality to its
woman citizens, since the WDTCs are owned by the municipality, managed and supervised locally,
involving the mayor, woman councilor and the woman members of the WDTC. The center is considered
to be supervised by the newly established Women Development Committee (WDC), responsible for
women affairs within the municipality. The WDTC, in turn, is under the auspices of the women’s council
in the municipal council. Along with this, the supervision and management of the WDTC is advised by
the Women Board (WB), which is operating under the Presidential Council (PC) of the Libyan
government. In addition, each WDTC has its own strategic management board responsible for the
management of the center, defining and setting the rules & responsibilities and
coordinating the activities within the center. Furthermore, selected local CSOs use the premises – in consultation with the management board – to conduct trainings, activities and seminars in
the social, physical/recreational and cultural field. 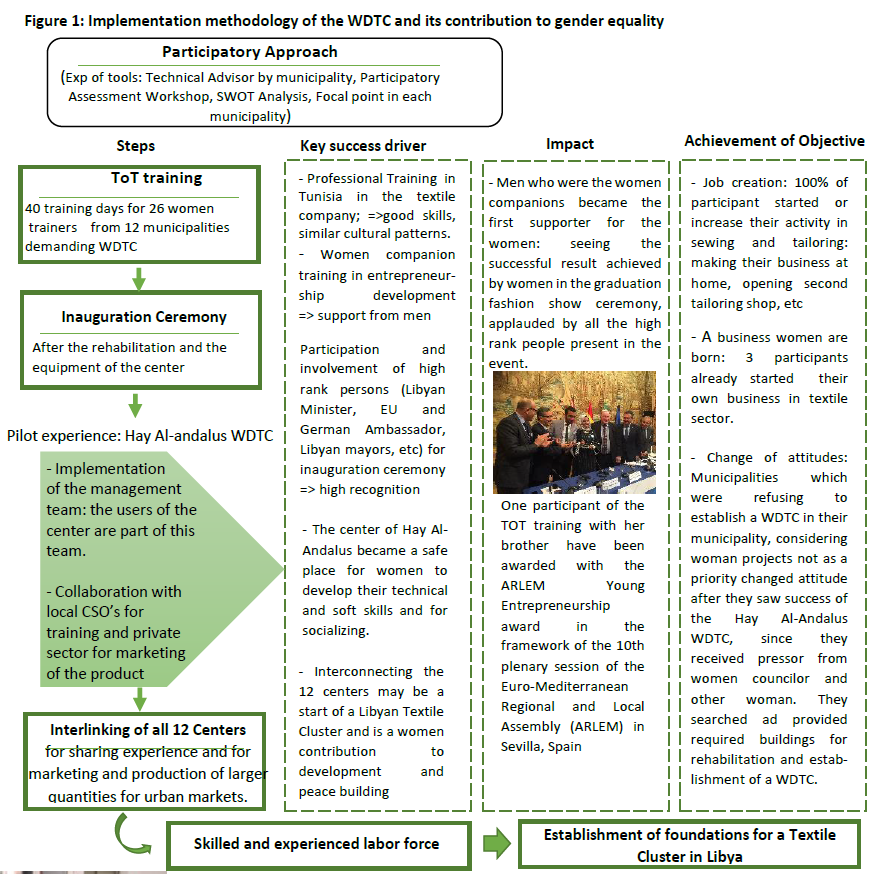 Figure 2: Women Development and Training activities and its contribution to Gender equality 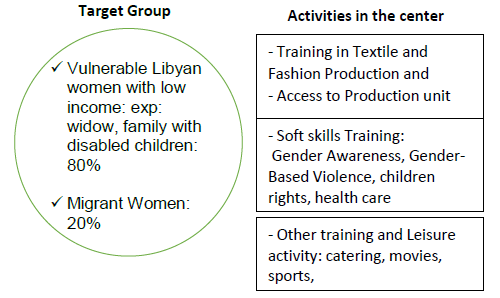 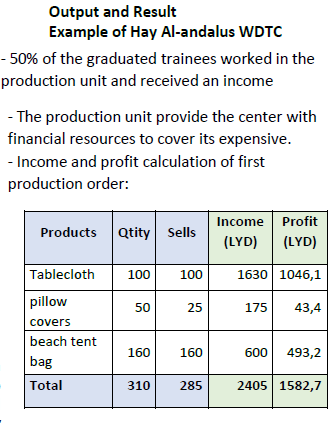 Contribution of Sport activity and soft skills training on Gender equality:
Sport and physicals activities improve the lives of girls and women
by fostering empowerment and gender equity. It can be a force to
amplify women’s voices and tear down gender barriers and
discrimination. The WDTC provides the safe space and necessary
equipment to enable these positive life changes for girls and women.
The WTDC in Al Andalous as the first established training center already provided 2 tailoring training courses
with more than 20 participants, conducted workshops, seminars and discussion groups on key topics related to
gender equality and women’s empowerment (more than 50 participants) and hence, supported transformative
training and learning. The thematic and specific field of action included Life- and Leadership Skills for Women,
Basic and Advanced Helping Skills against Violence and Discrimination, Child care, Human Rights for Women,
etc. The activities are implemented by selected local CSOs mostly led by women. The trainings for gender
equality and women’s empowerment is a transformative process that aims to provide knowledge, techniques
and tools to develop skills and changes in attitudes.

5- Next Step and Conclusion:

– Finalization of renovation and equipment of 8 new WDTCs, prepare for
tailoring training of more than 80 woman, enable food processing and catering
training, prepare soft skills and sports training and finalize supervision,
management and networking concepts to support the woman in the centers
in their endeavors to create inclusive societies that recognize the need to
promote gender which is a long-term process that requires political will and
commitment
It is envisaged to extend the WDTC approach to 25 municipalities, including
8 WDTCs in the East and to train more than 1500 woman. In the East is a
more conservative society which will pose new challenges for women
empowerment. Furthermore, our GIZ approach shall lead to the elaboration
of a comprehensive national strategy for the WDTC role with the aim to
establish one WDTC and safe place for the woman in each municipality of
Libya.

Development, is our social an economic weapon

Training, to receive and to give

Center, of our reason to be