Afghanistan: “The Promotion of the Rule of Law (RoL) in Afghanistan” 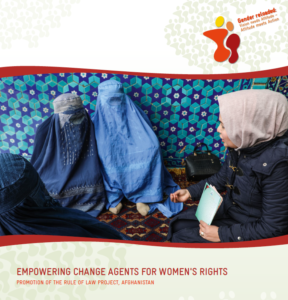 The situation for women in Afghanistan is one of the most deteriorating in the world. Women are perceived as incubators, inferior and objects. Local traditions and customary values are highly patriarchal. The Promotion of the Rule of Law Project commissioned by the German Ministry of Cooperation and Development (BMZ) is partly financed by the Dutch Foreign Ministry. Gender Focal Points (GFPs), female volunteers and by now role models, are providing basic legal advisory to women in rural areas. Currently 104 volunteers in almost 90 districts in Northern provinces are mediating cases either themselves or referring them to other justice actors. GFPs are trained and networked among each other with the support of the Ministry of Women´s Affairs (MoWA). The cooperation with the Ministry of Hajj and Religious Affairs (MoHRA) and the Ministry of Education (MoE) is new. A joint manual on women´s rights in Islam was developed and is used to train Madrassa (religious schools) teachers. Madrassa is the most common school type and often the only source of education, especially in rural areas. At least 2.000 teachers are envisioned to be trained, acknowledging their authority and enable them as agents of change. 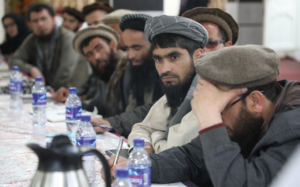 GIZ is the first international partner to work with Islamic schools acknowledging cultural differences. It is perceived as a partner promoting gender equality while respecting religious values and not imposing European standards – an innovative and successful endeavor. GFPs are well-known and invited as outstanding role models, e.g. by female small and medium enterprise owners, internally displaced people and female police officers. The feedback of our partners, MoHRA and MoE, trained teachers and GFPs is highly motivating. The MoWA requests to have a videoclip about the work of GFPs underlying and portraying the importance of their work.

The huge impact is reflected in success stories of GFPs: girls attending school, preventing forced marriage/ child marriage, achieving separation or divorce, stopping domestic violence, supporting economic independence etc. GFPs received case registration books and data about the handled cases are collected by DoWA, our provincial partner. The MoWA declares ownership and requests to extend activities to more (ideally all) provinces. Investing in the capacity of the GFPs is very sustainable because their knowledge of women´s rights, networks, and activism will continue, beyond the project´s lifetime. The training results of the madrassa teachers are unknown, yet. But the decision to integrate religious authorities as powerful players significantly widens the projects reach in providing access to justice. Expectations and motivation levels are high with participants expressing their interest to learn more about gender roles in Islam and secular law.